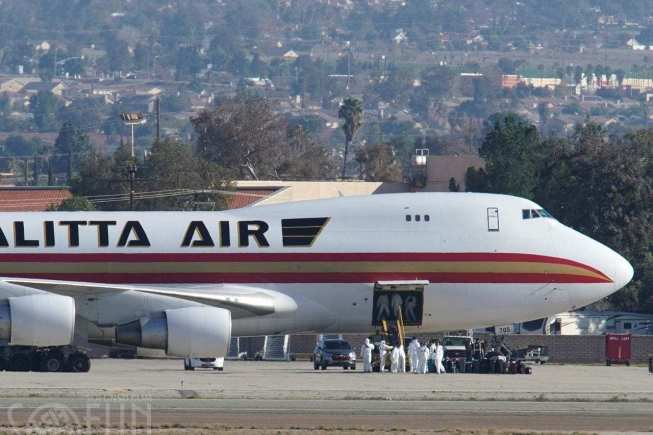 Some 340 Americans have arrived back in the United States after boarding two chartered planes to evacuate from the cruise ship Diamond Princess quarantined in Japan–the largest cluster of the novel coronavirus outside mainland China. It’s been stuck in Yokohama Harbor since February 3, after a passenger from Hong Kong tested positive for the coronavirus since disembarking. Fourteen of the American evacuees tested positive for COVID-19 and have been hospitalized.

U.S. officials learned of the positive test results “during the evacuation process, after passengers had disembarked the ship,” said a joint statement from the U.S. State, and Health and Human Services departments. The 14 evacuees were flown back in isolation from others and under constant monitoring.

Upon arriving home in the United States, all other passengers entered another 14 days of quarantine, on military bases in California and Texas.

Some exhausted passengers, who’d been counting the days until they go home–which had been set for February 19–understandably expressed anger at the thought of another 14 days of quarantine.

“It’s like a prison sentence for something I did not do,” expressed Karey Mansicalco, a real estate company owner in Utah.

Others are only happy to get out.

“But it doesn’t even matter. I am back home,” posted Sarah Arana on Facebook.

Some 61 U.S. citizens were barred from flying home, because they were “suspected of having had an exposure to novel coronavirus (COVID-19)” and the Department of Homeland Security temporarily placed those Americans on a federal no-fly list, according to the CDC.

U.K. citizens were some of those remaining on board the virus-ridden ship, with many wishing the British government would take an example from the U.S..

“The very latest information from the U.K. is, they have been ‘tirelessly working’–which is what we’ve heard for a number of days–and the outcome would appear that they consider it best that we go into a medical facility in Japan, where we would get the top treatment,” David Abel, on board with his wife, told The Telegraph on Monday.

“Isn’t it strange that no other government has come up with that amazing idea?” he added, shaking his head in frustration over the British government’s lack of action.

Around 600 more passengers left the Diamond Princess on Wednesday (February 19), as the controversial quarantine finally began to be lifted. A further several hundred people who weren’t taking repatriation flights were allowed off the ship on Thursday.

The embassies of Canada, Australia and Hong Kong decided to transport their citizens home via charter flights to be back by Friday (February 21) at latest. Like the U.S., an additional 14 days of quarantine will be required in the respective countries.

Japan’s health ministry says all passengers were tested for the COVID-19 virus before disembarking. Officials announced 79 additional confirmed cases as of Wednesday, yet new cases were popping up even hours before passengers were scheduled to leave. The total number of people who have tested positive is reported to be 621–nearly 20% of the 3,711 passengers.

In fact, it’s not hard to understand why governments internationally are ordering an additional quarantine, considering the rapid spread of the virus on board the Diamond Princess.

Infectious disease specialist, Dr. Iwata Kentaro of Japan’s Kobe University Hospital–who has more than 20 years of experience with outbreaks like Africa’s Ebola, Cholera, and China’s SARS–posted a Youtube video criticising Japan’s handling of the ship-wide quarantine, after visiting the Diamond Princess on February 18.

“The cruise ship was completely inadequate in terms of infection control. No distinction between the green zone–which is free of infection–and the red zone, which is potentially contaminated by virus,” he said.

He described the ship’s environment as being “completely chaotic”.

“I never had fear of getting infections myself… because I know how to protect myself and how to protect others,” said Dr. Iwata. “But inside Princess Diamond, I was so scared… because there was no way to tell where the virus is.”

“The bureaucrats were in charge of everything,” he added.

In violation of ordinary procedures, health ministry officials, crew members and psychiatrists mingled and even ate together, he said, with some wearing full protective gear and others none at all.

Dr. Iwata removed his video early Thursday morning with little explanation, after the health ministry became “very unhappy” with his suggestions for improving infection protections. He had been accused of violating the terms under which he boarded the Diamond Princess and ordered to leave, reported The Wall Street Journal.

Some experts have pointed out that Japan does not have an agency in charge of combating disease and infections. One problem is that the country’s response was conducted by public servants who may not have had any expertise in infectious disease management.

The fact that many countries are imposing an additional 14-day quarantine for passengers who are finally free to return home certainly reflects a lack of trust in the effectiveness of the ship’s quarantine procedures. Some passengers will be remaining in Japan and are still barred from returning home for at least 14 days.

The overwhelming uncertainty is reflected in the passengers themselves.

“I’m a bit concerned if I’m OK to get off the ship, but it was getting very difficult physically,” a 77-year-old man who got off with his wife told Japan’s Kyodo News. “For now, we just want to celebrate.”

Japanese officials say the 443 people who left the ship on Wednesday (February 19) had tested negative for the virus. However, it’s not clear when they had been tested, meaning they could have possibly been exposed to infection for several days afterwards.

“If indeed transmission was ongoing on the ship, then ultimately I suspect that decision [by the authorities to release them] will be proven to be incorrect,” says Dr. Benjamin Cowie of the Peter Doherty Institute for Infection and Immunity in Melbourne, Australia.

Kyle Cleveland, a sociology professor at Tokyo’s Temple University, who has studied Japan’s response to the Fukushima nuclear meltdowns, says he has been observing troubling similarities.

“Japan is sometimes a victim of its own competence,” he says. “Everything works, and it’s a highly structured, functional society in every respect. And then when things go off the rails, they think that normal everyday processes are going to be sufficient.”

The U.S. is one country that has been praised for taking a leading role and taking exceptional action.

According to a letter to American passengers still on the ship from the Centers for Disease Control and Prevention, the country is considering a possible second charter flight.

“I just want to thank President Trump and the US government. … There has been a lot of silence, but now we realize silence has been putting together a very good plan,” said Gay Courter from Florida, grateful to set foot back in the U.S., where she feels safe.