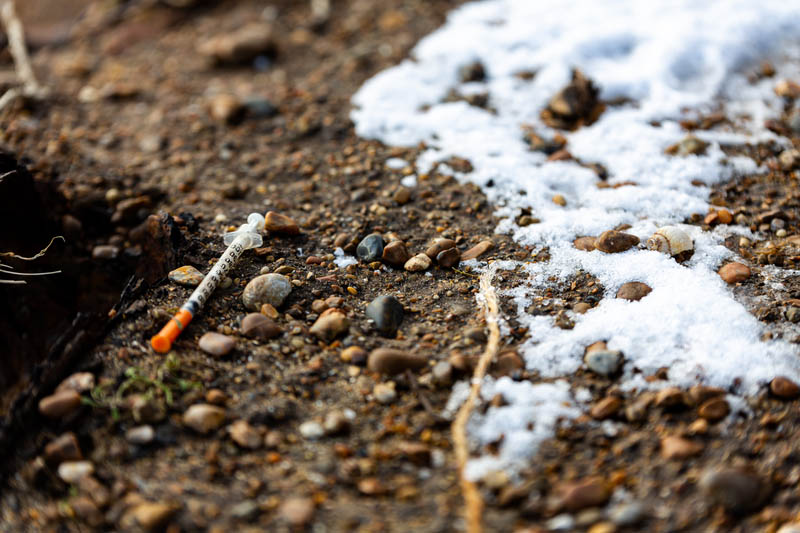 A used syringe that has been discarded on the floor at a popular Suffolk beach. It appears to have been used and left there by a drug user. (Photo: Simon Collins | Dreamstime.com)
By Akerele Christabel November 4, 2022 5:35 am PST
Facebook
Twitter
SHARE
Facebook
Twitter

Fifty times more potent than heroin, this powerful opioid is the stuff of nightmares.

We are not trying to scare you,” said Chelsea Shover to the Mercury News. “But we are trying to tell you what’s happening now, and it is different than what was happening a few years ago.”

Like Cassandra in Greek mythology, Chelsea Shover sends another warning to America. An assistant professor of epidemiology and health services, she co-authored a study on Fentanyl’s permeation into society in 2020. That same year, Fentanyl overdoses claimed the lives of 4000 people, an astronomical number compared to the previous year. This was worsened by unchecked drug trafficking along the Mexican border.

At this report’s time, the drug maintains a stranglehold over San Francisco’s Tenderloin and the Bay areas. California is also among the worst-hit areas in terms of deaths from drug overdose.

In 2021, the deaths from drug overdoses left lung cancer and heart diseases in the dust. With 5722 deaths from Fentanyl, according to the California Department for vital statistics, the charts for the cause of most deaths have finally been toppled.

What makes Fentanyl so insidious is that one could use it without knowing. Some other drugs could have been laced with the opioid. This is why schools have decided to increase their medical facilities to prepare for possible drug overdose cases. Experts recommend using test strips to determine if the drugs contain traces of Fentanyl.

To properly ascertain the extent of the damage done by Fentanyl, we have to look at these disturbing statistics:

However, Ms. Shover insists that the numbers will continue to rise “until we actually respond.” She is right. All this time, the government and society have been playing a game of sit-it-out-and-see-what-happens. It is now the time to react no longer but respond with intentional actions. We should look at the sources of the problem.

One of these sources is associated with the low costs of producing Fentanyl. This makes it easier to be produced and, when sold, brings in a windfall. Another source is the presence and relative freedom of the Mexican cartels to traffick drugs in large supplies. Apart from the occasional crackdown operations carried out by American law enforcement agencies, the cartels’ activities have continued unimpeded.

The spokesman for the Major Crimes and Drug Trafficking Team of the Santa Clara County District Attorney’s Office believes that the Mexican cartels have designated interstate 5 as a Fentanyl trafficking route. With the raw materials they smuggle in from the border, they can produce this killer drug in large quantities. Exacerbated by the low cost of production compared to the demand and potency, dealers can make a ton of cash from trafficking Fentanyl.

According to Attorney General Rob Bonta, a Fentanyl task force has seized more than 4 million pills and nearly 900 pounds of powdery-form Fentanyl since April 2021.

Still, this problem should be tackled at the root; the individual. Teenagers who take drugs are known to be victims of psychological and emotional upheavals. Government and society should take Ms. Shover’s idea and ” actually respond” to the case on hand before it claims more lives