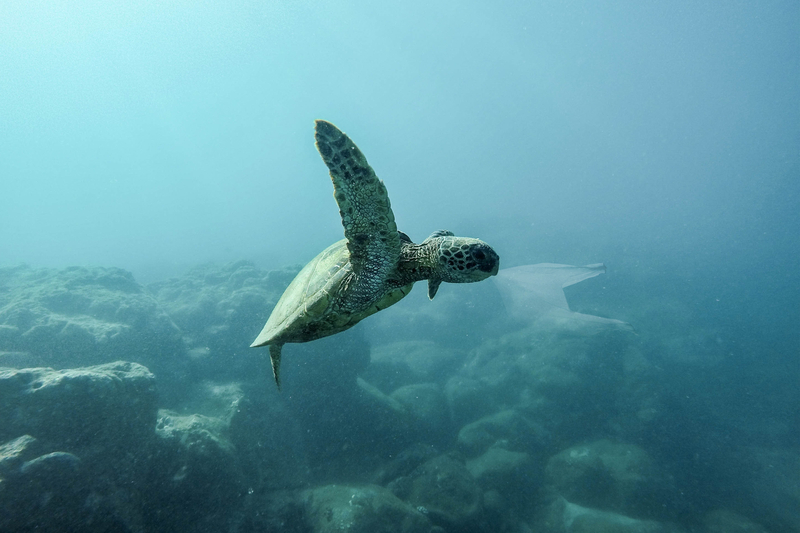 Sea Turtle eats a plastic bag. The under water pollution is one the most difficulty environmental issues, that most of human and industry wastes end up deep in the ocean. (Photo © Annegordon | Dreamstime.com)
By Christabel Akerele September 10, 2021 2:18 am PST
Facebook
Twitter
SHARE
Facebook
Twitter

In 2019, 19-year-old Fionn Ferreira won the Google Science Fair for his groundbreaking invention on how to tackle plastic pollution in aquatic bodies. His invention involves using magnets to attract microplastics from water. At first, it appeared rather simplistic, after over 5000 trials it was proven to be a whopping 87% effective.

Fionn Ferreira is a young inventor and chemistry student at Groningen University in the Netherlands who is passionate about creating a plastic-free environment.

Plastic pollution is a very real and severe problem in the world today. Many regulations have been put in place and many attempts have been made to control the production and disposal of plastic waste, however, they have proven rather ineffective in managing the $579.7 billion industry.

Since it first began to gain popularity in the early 1950s, more than 8.3 billion tons of plastic have been produced to date, with more than half of this production coming from after the early 2000s in which the “output of plastic waste rose more in a single decade than it had in the previous 40 years.”
This means that nearly 300 million tons of plastic waste are produced every year, almost equal to the weight of the entire human population.

However, despite the boom of the industry, attempts to provide effective solutions to the plastic waste dilemma have proven rather ineffective. Research shows that “only 9% of all plastic waste ever produced has been recycled. About 12% has been incinerated, while the rest — 79% — has accumulated in landfills, dumps or the natural environment”.

Despite this, production of plastics is estimated to increase by 60% by 2030 and triple by 2050. In the light of this, the Ellen MacArthur Foundation suggests that by 2050, there will be more plastic than fish in our waters.

The consequences of increased plastic waste on the environment are disastrous. Because plastics are non-biodegradable, they keep accumulating in water bodies all over the world. They are frozen solid in the artic, and littered all over the reefs. Some of today’s natural disasters are suspected to be a result of increased waste in our water bodies that inevitably increases the weight and force of moving water.

The effect on aquatic life is also alarming as many underwater creatures struggle to survive in what is becoming an unnatural environment. Consequently, all of these affect humans in overwhelmingly negative ways.

However, what about the plastic we cannot see? Microplastics are small plastic pieces less than five millimeters long which can be harmful to our ocean and aquatic life. They can be found everywhere, from our clothes to our drinking water, to shampoo and laundry detergents, they are absolutely littered throughout our entire lives.

According to BBC news, ‘chemicals used in plastic have… been linked to a range of health problems including cancer, heart disease and poor foetal development.’ The danger that microplastics pose is their largely undetectable presence in many fluids. Research proves that people ingest an average of 5g of plastic every week globally.

Fionn, who is aware of the dilemma, stumbled on an idea that could help protect the human race from itself.

The idea is built on the fact that microplastics attract pathogens and heavy metals. Fionn created a magnetic fluid called Ferrofluid, that clings to microplastics present in water and then uses a magnet to remove all the microplastics from the solution, leaving behind only water.

Much of the scientific world received this simple idea as groundbreaking, as Fionn’s design not only removes plastic waste from moving water, but it is also very effective in removing all types of microplastics as well.

Fionn is now working in conjunction with several other scientists to produce a cheap, environmentally friendly and effective device that integrates nicely with existing facilities and that can be used across various structures, from homes to schools and offices.

By attracting the plastic we cannot see, Fionn has given the world a fighting chance in combating our self-made omnipresent enemy