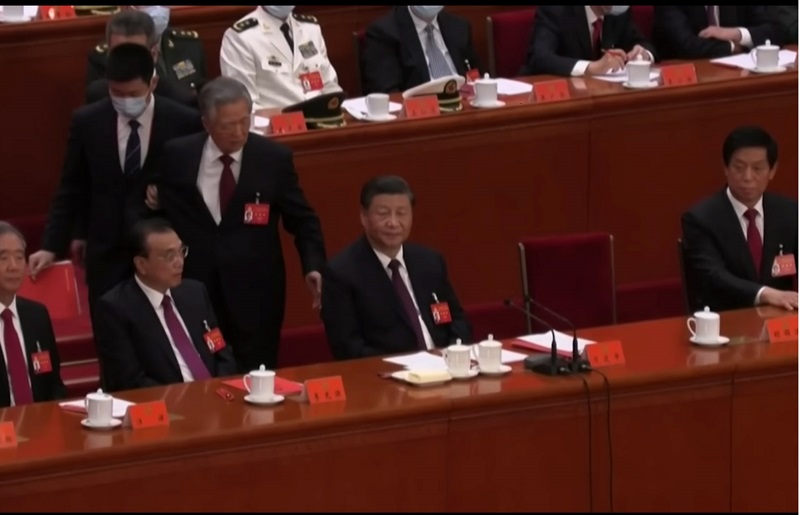 Is Xi Jinping throwing his predecessor under the bus, or is it just another staged event?
The Chinese political scenery has always been confusing. When it comes to the Asian political giant, observers are left guessing what is truly going on.

Can we believe what we see as the truth, or is it just what we are being made to see?

This question floats on the mind of everyone who has been watching how the game of power is currently playing out in China. If the former controversies were not enough, Xi Jinping and his men of the Communist Party have made a new and surprising move.

According to Xinhua, the Chinese news agency, Mr. Hu Jinato- a one time President of the People Republic of China and general secretary of the Communist Party- was escorted out of the Great Hall after feeling unwell. If this was another country, a 79-year old politician falling sick is hardly news. Except that this is not any other country. This is China, with a reputation for murky political waters, where truth is often muddied with fiction, drama, and dark secrecy. In addition, there are a series of events in the same meeting that makes one suspect that there is more to this than meets the eye.

Hu was able to attend the first day of the week-long congress, although he looked ailing and was supported by an official while in attendance. On October 22, 2022: the last day of the congress, there was an initial closed doors meeting, with members of the press kept out. The former leader of the Republic of China made his controversial exit after the cameras had been called in.

If however his illness was critical enough to get him to leave the meeting abruptly, why wait until the cameras were let in?

What is somewhat unnerving is that while Mr. Hu was being led away by Xi’s secretary, he said something to Xi Jinping that prompted a nod from the Chinese political hegemon. Mr. Hu later appeared to speak to Li Keqiang, patting his shoulder before being led away.

What did he say to the most powerful man in China?

No one will know.

Video footage surfaced where other senior figures in the party, Li Zhanshu and Wang Yang, appeared disturbed at the exchange playing out in front of them. At one point, Li Zhanshu made a move to help Hu Jintao but was prevented by Wang Huning who tugged on his jacket as if to say “Don’t jump into this situation.”

Then, as Hu Jintao left the Great Hall, he is seen , perhaps out of confusion, trying to take Xi Jinping’s notes. Xi shunned this move by placing a firm hand on the notes, taking them from Mr. Hu’s frail hands.

What was written in those notes?

Hu Jintao, who ruled China from 2003-2013, was notable for his efforts in changing the Chinese national outlook – which was a lot like the modern-day North Korea under Kim Jong Un. The 2008 Beijing Olympics saw China opening up to the outside world, with foreign companies springing up everywhere, tourists flooding in, and restrictions on the internet being lifted and freedom of press finally instituted. Mr. Hu can be given credit for managing to exorcize the demons in China’s global reputation.

However, with Xi Jinping, China is reliving the political, social, and economic isolation Hu Jintao had previously saved it from. Xi is the unquestionable, ultimate, ruler of the nation, taking orders from none, yet giving orders to many . Set for a third term in office, he is now regarded as the most powerful man in the country since Mao Zedong, the original founder of the Communist Party.

Hu Jintao leaving the Great Hall might be a figurative for the disposing of ‘weak’ leadership in favor of a firm, more dictatorial regime. This might be the message China is sending to the world.