As globalization stitches countries and cultures together that have been separated by vast oceans, many people are becoming aware of when the Chinese New Year is.

The weeks long festival is a joyous occasion celebrated by over a billion people, and culminates in the Chinese Lantern Festival.

The origins of this celebration dates back over 2,000 years, and while the legends vary, the theme is the same: Light dispelling darkness, and people’s reverence and observance helping to create a bright new year filled with blessings.

There are two foods traditionally eaten during this time, one of which “nian gao” (Chinese New Year Cake). Legend has it that a monster which lived in the mountains would eat people during winter because all the animals were hibernating. One day a man made a cake out of rice flour and left it outside. After eating it, the monster was no longer hungry enough to eat humans, and returned to its lair. “Nian gao” sounds like “every year goes higher”, and whomever was able to make the tallest cake, was said to be blessed in the upcoming year. Archaeologists have also found 7,000 year old remains of nian gao, making it one of the oldest foodstuff on the earth. Another food, “tangyuan” or “soup balls” is also served. It is a rice flour dumpling usually filled with a sweet or savory filling such as sesame seed paste, chopped peanuts, red bean paste, or nothing at all, and symbolizes the unity of family and community.

Each dynasty had its own custom when it came to how the Lantern Festival would be celebrated. For example, during the Qing dynasty the New Year celebrations lasted until the Lantern Festival on the 15th day of the first month of the New Year. Different shapes of lanterns resembling animals, flowers, fruits, etc. were made from thin white yarn and painted with different colors. One of the lanterns was 15 feet long and looked like a dragon. It was tied firmly to ten poles. Ten eunuchs held them and danced to music. One eunuch moved in front of the dragon holding a large round lantern and pretending to avoid being eaten by the dragon. It was called “dragon playing with a pearl.”

After the dragon lantern dance there was a spectacular firework display. The fireworks showed different scenes from various dynasties as well as various flower shapes. Mobile wooden cabins were placed nearby so that the Empress Dowager Cixi and her guests could sit inside to watch the fireworks. This activity lasted for several hours. Thousands of strings of firecrackers exploded and afterwards people would return home full of joy and anticipation for the coming year. The Imperial Palace returned to normal, as did the commoner. 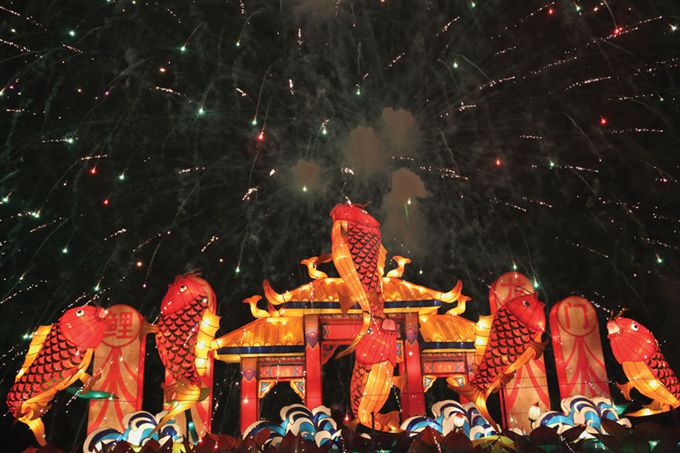