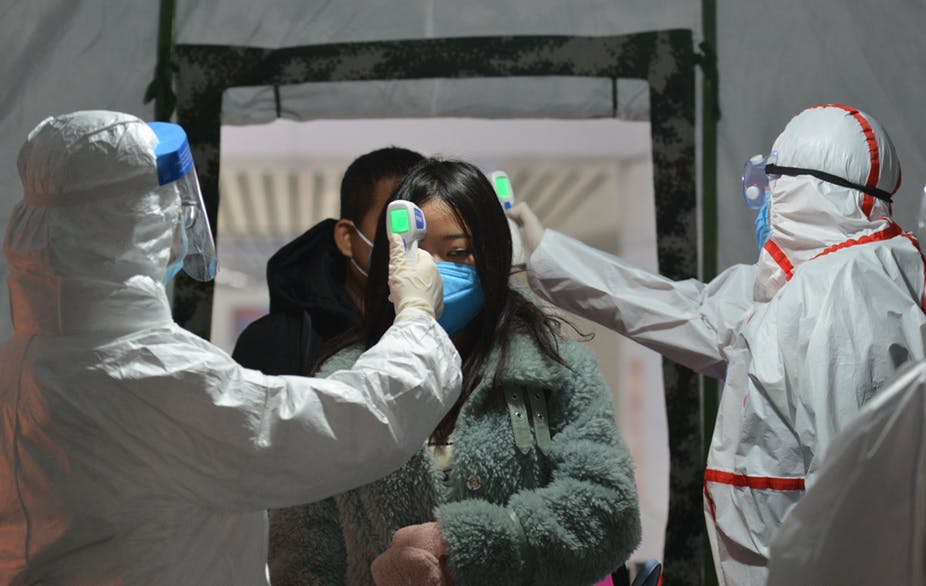 With 1.5 billion lives at steak, China really has few choices in terms of repressing the new coronavirus. The country has become one massive region of quarantine–the largest ever recorded in human history. With its robust military resources and a populace that’s largely thought-conditioned,the communist government has rapidly sealed off the land, sky and sea in no time.

Despite international call for transparence, it appears China has not lived up to its word. The numbers have been massively under-reported and the facts clouded over.

ith its surging spread, China’s new coronavirus outbreak has now far overtaken what SARS was, in numbers of infections.

China announced over 3,100 new cases on Friday (Jan. 31), and as of Saturday Feb 1, the total number of people infected in the country reached a high of 11,791, including 9 cases in Taiwan, with a reported death toll of 259.

A lockdown in the whole city of Wuhan likely came too late to control the virus’ spread, says Guan Yi, a leading virologist. Wuhan authorities say five million people left the city, because of the Chinese Lunar New Year and the outbreak. That’s five million people who could have potentially carried the virus out of the city.

The virus has been spreading wildly. Globally confirmed cases of the coronavirus are now close to 12,000. U.S. officials on Friday (Jan. 31) declared the outbreak a public health emergency along with the announcement of the seventh confirmed case in the U.S., in Santa Clara, California.

But confirmed numbers may reflect only the tip of a terrifying iceberg. The British medical journal The Lancet estimates that more than 75,000 people were infected last week alone.

“Now, if that is true, that would confirm fears that many people already have–that Beijing’s massively under-reporting its numbers,” reported CBS News on Saturday.

China’s top University researchers have recently come out with a report that puts the actual number of infected people at around 20,000. And some claim the number even higher. On January 27, a Wuhan nurse insisted that the outbreak is far worse than officials admit.

“At this moment, Hubei province, including Wuhan–even China–90,000 people have been infected by coronavirus,” she said, in a video that went viral.

A data-driven mathematical model from the University of Hong Kong (HKU) academics puts the number at 43,590 and predicts the number of infections could see 150,000 new cases every day in the megacity of Chongqing alone, between late April and early May.

Actually, the higher figures may not be so far fetched.

Shi, a UK resident who returned to Wuhan to be with her hospitalized elderly mother during the Lunar New Year, says that she developed a fever after catching the virus in her mother’s hospital. After nine hours of tests–a nasal swipe to rule out the flu, a CT scan to check her lungs, and a blood test–the doctor announced that she, as well as her 67-year-old father, had coronavirus, but because the fourth, most definitive test could not be offered, they could only be considered suspected patients. Shi could not find a single hospital in all of Wuhan that could offer the final reagent test.

HKU scientists believe both a chest X-ray and blood tests are a waste of resources, when the PCR rapid test could be done in a couple of hours.

Dr. Christian Drosten of the German Center for Infection Research developed one of the first tests for the novel coronavirus at his lab. He says that making a test to screen for a virus is pretty easy, once you identify the viral genome.

But most Chinese hospitals lack the capacity to test for the coronavirus. PCR tests are now being run in Hubei province, where the Wuhan virus originated and results from each test should come back in one to two days. But with so many people, the back-lag is heavy. People have begun saying that it’s so hard to get a test that getting a kit is like winning the lottery. And suspected patients are not counted in the official statistics of people infected. That’s on top of symptoms not showing for up to two weeks.

The initial mildness of the virus is what is concerning experts, as it means that people can potentially spread the virus undetected for weeks, without showing any symptoms. Chinese authorities have reported the incubation period to be as long as two weeks. Despite the current low death rate, not containing the virus properly can put the most vulnerable–typically the youngest and oldest–members of the public at high risk.

The World Health Organization (WHO), on Thursday (Jan. 30), classified the outbreak a “public health emergency”, saying the “whole world needs to be on alert,” not just the epicentre in Wuhan, China.

On January 28, Hong Kong’s leader Carrie Lam announced a list of travel restrictions, yet refused to comply with residents’ demand to completely close the border. Medical doctors began their strike on Saturday (Feb. 1) in a push for complete closure.

So where did this wild virus come from? In a new study published in The Lancet on January 29, scientists pointed to bats as the likely hosts of the new coronavirus, dubbed 2019-nCoV.

However, Daniel Lucey, an infectious disease specialist at Georgetown University, says according to those first clinical cases, the first human infections must have occurred in November 2019 or earlier. The virus may have spread silently, before the cases were discovered in late December from Huanan Seafood Wholesale Market, where a variety of wild animals were sold.

“China must have realized the epidemic did not originate in that Wuhan Huanan seafood market,” said Lucey in an interview with ScienceInsider.

The data in The lancet also raises questions about the accuracy of the initial information China provided, he says. At the beginning, the Wuhan Municipal Health Commission referred to the 41 patients as the only confirmed cases and the count remained the same between January 11 and 18. The commission repeatedly noted that there was reported evidence of human-to-human transmission .

Wuhan authorities most likely under-reported on numbers, according to Mary Gallagher, the director of the Center for Chinese studies at the University of Michigan and an expert in Chinese politics.

“It’s not even necessarily an insidious command from the central government–it’s almost like an implicit norm, that bad news is to be covered up as much as possible,” she says.

Less than three weeks later, China had a different story. On January 20, Chinese-appointed expert Zhong Nanshan said there was indeed evidence of human-to-human transmission. One month later, the confirmed number of cases has reached five figures.

In fact, the true origin of the deadly virus may be linked to Beijing’s covert biological weapons program, reveals Israeli biological warfare and military intelligence expert, Dany Shoham. Wuhan’s Institute of Virology happens to be the only declared site in the whole of China capable of working with deadly viruses.

“Certain laboratories in the institute have probably been engaged, in terms of research and development, in Chinese [biological weapons], at least collaterally, yet not as a principal facility of the Chinese BW alignment,” Shoham told The Washington Times.

“In principle, outward virus infiltration might take place either as leakage or as an indoor unnoticed infection of a person that normally went out of the concerned facility. This could have been the case with the Wuhan Institute of Virology,” he said.

2016 documents do show that the Wuhan Institute of Virology has been studying the coronavirus for a number of years. If the unconfirmed reports are true, it would not be the first time a Chinese research facility has leaked a deadly disease. March 2004 saw 9 people infected and 1 dead after the SARS virus escaped from Beijing’s National Institute of Virology, where researchers were conducting live and inactive SARS coronavirus experiments.

U.S. Health officials on Thursday (Jan. 30) reported the first case of person-to-person transmission of the coronavirus in the United States. The patient, who had not been in China, is the husband of a woman in her 60’s–the first reported victim in Chicago–who had returned from travel in Wuhan. She was hospitalized but appears to be doing well, says Dr. Jennifer Layden, an epidemiologist at the Illinois Department of Public Health.

If someone who carries the coronavirus breathes, talks, coughs or sneezes in the vicinity of others, person-to-person transmission may occur through respiratory droplets that carry the virus landing on people or surfaces.

“We understand that this may be concerning,” says Dr. Robert Redfield, director of the Centers for Disease Control and Prevention. “But our assessment remains that the immediate risk to the American public is low,” he says.

U.S. officials are banning foreign nationals who have traveled to China in the last two weeks and aren’t immediate family members of U.S. citizens or permanent residents from entering the country. Additionally, anyone entering the U.S. who has been in China’s Hubei Province in the last 2 weeks will be subject to a 2-week quarantine, says Human Services Secretary Alex Azar.

U.S. health officials ordered a federal quarantine on Friday (Jan. 31) for the 195 Americans evacuated from Wuhan, who will stay at a military base in Southern California until mid-February, according to Dr. Nancy Messonnier, director of the National Center for Immunization and Respiratory Diseases.

Meanwhile, in China, an already overburdened health system is showing signs of buckling under the heavy weight of a health crisis that’s proving hard to contain.

“There really are a lot of people who can’t get admitted, but there’s no point in blaming the nurses. There are no beds, no resources. Are we supposed to just fight this battle bare-handed?” one Wuhan nurse told CNN. She is self-quarantined at home, like many others.

Staff are at breaking point; around 30 of the 500 medical staff at her hospital are now hospitalized, and resources and beds are running very low. Due to so few hazmat suits, staff are disinfecting them at the end of their shift to wear again the next day, she says. “We will admit [only] if they’re dying,” another staff member responded.