Home Cultural Developing an Ordered Soul: The Importance of Self-Esteem to the Ancient Greeks 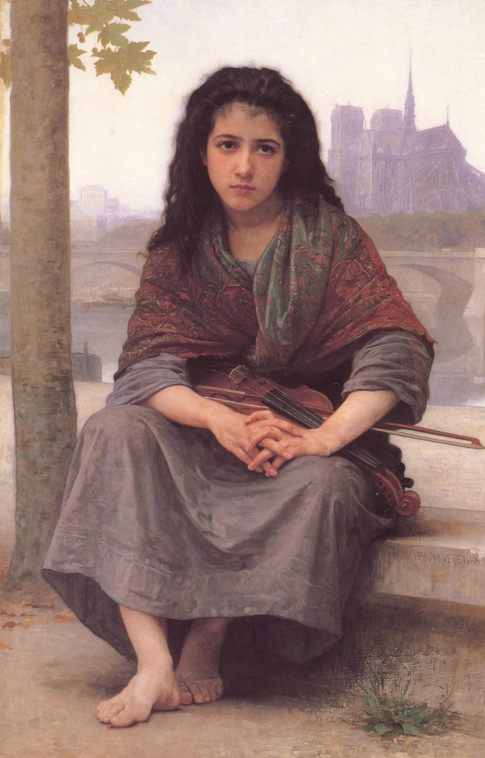 The French artist William Bouguereau went out of his way to esteem others in his paintings that were denigrated in French society in the 1800s when he lived. The poor were looked down on at that time, especially children, unwittingly, because of their lack of the means to produce wealth. Many people born into poverty saw themselves as “lesser than” the wealthy based on notions developed in French and Western culture. Bouguereau sought to undo that belief and called for empathy. The above is a painting of a gypsy girl, surviving by playing her fiddle for handouts.
By Tim Gebhart December 12, 2020 4:39 am PST
Facebook
Twitter
SHARE
Facebook
Twitter

According to the ancient Greeks, amongst all of the aspirations we could have in life, there is one, the most vital that is so often overlooked, it is the development of a dignified and healthy relationship with ourselves and the cultivation of a positive self-esteem. The definition of self-esteem is “confidence in one’s own worth, abilities, or self-respect.” The complexity of our own bond we develop with ourselves affects every aspect of our lives and how we see and interact with the world and others. It affects and makes up our mental state and determines our level of contentedness. Ultimately, maintaining this relationship is one of the greatest challenges we may face in our lives, and one that if we master,  offers the greatest of rewards.

The ancient Greeks were obsessed with ordering everything in the cosmos and unravelling its divine nature (Truth, Goodness, and Beauty). They structured that wisdom into functions they could understand and manifest in the world, from sacred geometry, music, architecture, and art, to logic and the development of coherent thought and critical thinking. The human being’s self-esteem had been mapped out, charted, and structured in the same way to help them in manifesting the ideal life based on their understanding of the cosmos and its divine nature.

Plato described a healthy self-esteem as an “ordered soul” and divided the faculties of the soul into three categories: epithumetikon, thumoeides, and logistikon.

Epithumetikon means “the small, or little desirer,” which focuses on material satisfaction and pleasures. The thumoeides deals with the immaterial such as reputation, our opinions, and notions. The last is logistikon which is derived from our common term the logos. The logistikon can be roughly translated as the willful desiring of wisdom and truth.

With an “ordered soul,” peace and harmony would arise naturally from within the person. Little in the external world would affect them. The Buddha Shakyamuni may have called that state “nirvana.”  That is how weighty our relationship with ourselves is and how consequential its effect on our lives can be.

“Therefore, when all the soul follows the philosophic [study of the fundamental nature of knowledge, reality, and existence] and is not factious, the result is that each part may, so far as other things are concerned, mind its own business and be just and, in particular, enjoy its own pleasures, the best pleasures, and, to the greatest possible extent, the truest pleasures.”

First and foremost in a being, the Greeks emphasized properly aligning one’s desires towards Truth, Goodness, and Beauty (see my article on Ancient Greek Revelations to learn more), set by the Gods as the three fundamental characteristics and pursuits that led towards divinity to develop one’s logistikon aspect of the soul. If the starting point is based on incorrect values, it will ultimately lead a person towards depravity and decay. Plato stated in the Delphi Classics, “whatever is your aim let virtue be the condition of the attainment of your aim, and know that without this all possessions and pursuits are dishonourable and evil.”

Notions and beliefs are ingrained in us as we grow up in society that informs our view of the world, our place in it, and our views about ourselves. Because we grow up with these beliefs, they are very difficult to detect but lie at the root of many self-esteem issues. Often, low-self esteem can come from abuse, betrayal, or any sort of trauma. A notion or belief can unwittingly cement itself in us as a result, one we may not ever be fully aware of. The thumoeides aspect of the soul that characterizes our beliefs about life and ourselves may be altered in a very unhealthy way. An example of this might be that if a person was often disparaged growing up, they may internalize the harmful words and develop a notion that they are less as important as others. They may then act too agreeable and spend their lives trying to please everyone around them at all times to avoid being hurt.  From this situation, unease in a person would develop, the thumoeides aspect of the soul, its beliefs and notion, would need to be corrected to give rise to a natural contentment again that comes from within, achieving centeredness.

A person might correct themselves by learning that they inherently are not those destructive beliefs or notions and try to understand them and their effects on the body (anxiety or impulses) they produce. The phrase “know thyself” was an aphorism taken very seriously in ancient Greece. The phrase had been prominently inscribed on the entranceway on the Temple of Apollo at Delphi (the center of the world for the ancient Greeks) clearly for all to see.

A person that is “out of order” is prone to a host of afflictions such as intense anger, jealousy, timidness, lustfulness, or a strong desire for money and power. These all come from a feeling of lack that comes from within. The Epithumetikon, or physical pleasure seeking aspect of the soul, desperately grasps to fill the void from the two other characteristics of the soul that are maligned.

Plato’s and the Greek’s definition of self-esteem is vastly different from our modern concept where the focus and remedies to a low self-esteem are solely based on external factors (often which we have little control over) and on our ever fluctuating emotions. The modern cure is often purely symptom-oriented.

“What we seek, at the deepest level, is inwardly to resemble, rather than physically to possess, the objects and places that touch us through their beauty.”

This is partly the reason why our modern world is so materially focused. We search for contentedness with ourselves externally, not knowing that internal harmony is a natural state that can arise from within. Nearly every aspect of modern society reflects this external pursuit, it produces a downward spiral that creates more imbalance and an unsettling within the soul. Many addictions, impulses, warped notions and beliefs develop as a result.

Modern consumer culture and marketing has masterfully created askew notions that has led to addictions developing within people. They have exploited and steered humanity’s attempt for contentedness towards deliberate ruin, heightened our addictive impulses, and have intentionally reduced our sense of self-worth. We become in this way a slave to our impulses and as a result, are easily manipulated.

“For a man to conquer himself is the first and noblest of all victories.”
~ Plato

When we set on the life-long path to find contentedness within, less from the external world can manipulate us. We will be able to withstand harshness from others more easily and find internal peace no matter where we find ourselves. If we truly appreciate and tend to this most complicated relationship we all have with our own being, we will be free and unfettered, unmoved by the world and develop what Plato described as an “ordered soul.”