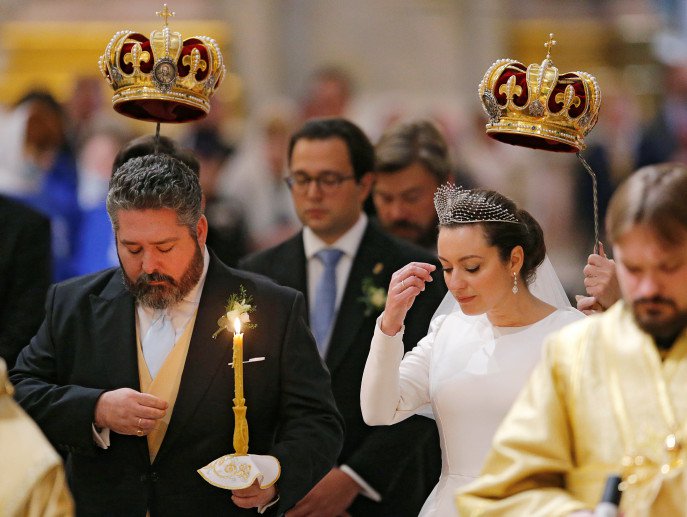 On September 30, 2021, at St. Isaac’s Cathedral in St. Petersburg, the former imperial capital of Russia, Grand Duke George Mikhailovich Romanov married Rebecca Virginia Bettarini. Two rows of honor guards escorted the newlyweds. Around 1,500 guests, many of prominent names, attended the wedding, such as Prince Rudolph and Princess Tilsim of Liechtenstein.

Metropolitan Varsonofy, the top official of the Russian Orthodox Church in St. Petersburg, blessed the wedding, according to NPR.

Besides the elaborateness of this royal wedding and the popular names of the guests, what truly grabbed attention for this wedding is that it is the first royal wedding in Russia since the Bolshevik communist revolution started in 1917. Grand Duke George Mikhailovich Romanov is the great-grandson of Grand Duke Kirill Vladimirovich of the Romanov Dynasty who fled Russia during the communist took over through Bolshevik revolution.

Vladimirovich was the cousin of the Romanov czar Nicolas II, the last emperor of Russia. The Romanov dynasty ruled Russia for around three centuries, ending with Nicolas II’s abdication in  1917. He was later on executed, along with his wife and five children, by revolutionists in 1918 in the city of Yekaterinburg during the Bolshevik revolution.

Grand Duke Vladimirovich, on the other hand, was able to leave Russia for Finland during the Bolshevik revolution to avoid the assassination by the revolutionists. Later on, Vladimirovich and his family moved to Germany, and finally to France. They lived in France until Vladimirovich’s death in 1938.

More than a century later, Vladimirovich’s great-grandson, George Mikhailovich Romanov, became the groom of a Romanov wedding, one of the first significant Romanov activities in Russia since the Bolshevik revolution.

According to Reuters, the groom of the wedding, George Mikhailovich Romanov, now 40, was born in Madrid, Spain, and spent most of his life in Spain and France. He moved to Russia only three years ago in 2019, along with his fiancée of the time, Rebecca Virginia Bettarini.

Rebecca Bettarini, now 39, is an Italian who converted to Russian Orthodox in 2020 and now takes the name Victoria Romanovna Bettarini, according to Reuters. Bettarini’s father, Roberto Bettarini, served as an Italian diplomatic Ambassador.

Romanov spending the majority of his life outside of Russia caused certain concerns from the public about whether his heart is still with Russia.

“My first language was Russian even though I was born in Spain and raised in France. My grandparents raised me on Russian history and culture and poetry. It’s always been in my soul,” George Romanov said in a recent interview, according to NPR.

Amid some questions regarding the truthfulness and credibility of George Romanov’s position as the heir to the Romanov dynasty, more people are glad to see the return of a prominent part of Russian history.

Alexander Dugin, a Russian philosopher, who was among the guests during the wedding, said to NPR, “It’s a kind of imperial wedding. A remembrance of eternal Russia—of sacred czars and patriarchs and [the] church.”

“In an age of ‘cancel culture,’ when everybody in the West tries to forget your own identity—your own history—Russia offers an alternative process,” Dugin continued. “We are trying to return to our roots.”