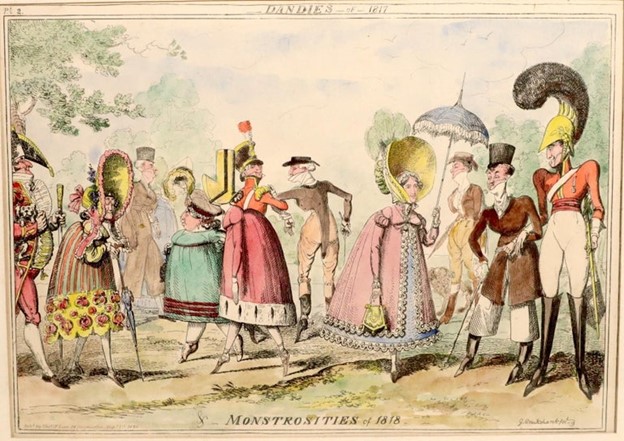 Long before Disney and Hollywood, there were many past artists who entertained children and families, telling stories with their drawings. During the 20th century, one popular household name is Norman Rockwell, whose paintings, post cards and publications have been preserved and promoted. On the other side of the Atlantic, there was another masterful artist, who is rarely remembered by Americans. His name is George Cruikshank. Cruikshank was born in London on September 27, 1792. He became famous in the art world at a relatively young age. He started his artistic career with scathing political cartoons, moved on to draw illustrations for books, and even worked with Charles Dickens, illustrating some of the famous novelist’s works.

George Cruikshank was raised in London. His father, Isaac Cruikshank, who established himself as one of London’s foremost political caricaturists in the 1790s, had a major influence on his son. After a brief stint in elementary school, George became his father’s apprentice and helper. George often added backgrounds and shadows to his father’s paintings. Isaac Robert, George’s older brother, followed in his father’s footsteps as well when he became a caricaturist and artist.

The Source of Creativity:

Cruikshank found his major source of inspiration from spending time inhis father’s workshop. Aside from that, he drew much of his inspirationfrom the streets of London. Observing individual from various socioeconomic statuses helped him become a successful caricaturist.

Cruikshank began his career by creating political cartoons. In 1811, when he was a teenager, the political cartoons he drew for the periodical entitled The Scourge, a Monthly Expositor of Imposture andFolly brought him fame. As George was apolitical, he was able toprovide an objective assessment of both conservative and liberal parties.

These cartoons contained political satire, anti-French propaganda, and criticism of King George III. The Napoleonic War, Queen Caroline, the controversy involving the wife of King George IV, etc., provided plenty of material for journalists at the time. George IV had married Caroline of Brunswick, a German princess, in return for Parliament clearing his debts. The pair loathed one another, engaging in several adulterous affairs and public scandals.

In 1818, Cruikshank collaborated with radical publisher and bookseller William Hone. Together, they wrote a booklet entitled Jack’s Political House. This twelve-page booklet with political poems by Hone and drawings by Cruikshank was an enormous hit. Cruikshank supported Queen Caroline and criticized King George IV with his pictures. However, in 1820, he accepted a £100 bribe from King George IV in exchange for a promise “not to caricature His Majesty in any immoral situation.”

In 1821, George Cruikshank chose to launch his business as a book illustrator, which was a less provocative career then that of a political cartoonist. He illustrated over 850 books. He is also considered one of the pioneers of entertaining children’s picture books.

Soon after, Cruikshank and his brother Isaac Robert decided to join forces. Isaac was attempting to establish himself in London as aportrait and miniature painter. Together, the brother published a book entitled Adventures of Tom, Jerry, and Logic, in Their Pursuits through Life in and out of London. Their book became anunexpected overnight success. It swept people off their feet, both in the city and in the countryside. The demand for copies, which increased with the publishing of each succeeding issue month after month, was so tremendous that the colorists could not keep up with the printers. The alternating scenes of high life and low life, the contrasting personalities, and therevelations of suffering next to extravagant waste and stupidity captured the reader’s attention, but the conversation and description enthralled people the most. The book never lost its vitality. The name “Cruikshank” became well-known in the streets of London in the 1790s.

After the popularity of his book, Cruikshank undertook other illustration assignments throughout the next decade. Additionally, he drew illustrations for Grimm’s Fairy Tales which hinted at the suffering caused by the Industrial Revolution.

George began publishing “Cruikshank’s Comic Almanack” in order to capitalize on the notoriety he had gained. William Makepeace Thackeray and other prominent authors of his period contributed to the book, with their writings appearing along with the images.

With the release of Cruikshank’s book, a publisher named John Macrone contacted him about illustrating the works of Charles Dickens. Cruickshank illustrated Dickens’ series Sketches by Boz, which was released in 1836. As a consequence, an increasing number of publishers approached him to do illustrations. He also illustrated Dickens’ book Oliver Twist.

In 1848, George Cruikshank released the renowned picture series The Drunkard’s Children. In this sequel to The Bottle, Cruikshank illustrates the effects of a father’s drinking on his children.  In 1857, he illustrated A Slice of Bread and Butter. The book is about ragged schools and theneed for temperance.

With 10,000 drawings, prints, and plates produced over his career, he made a tremendous contribution to art. His art is on display in the British Museum and the Victoria & Albert Museum in London.

Regarding his contribution to history, Punch Magazine said of him:

“There never was a purer, simpler, more straightforward, or altogether more blameless man. His nature had something childlike in its transparency.”