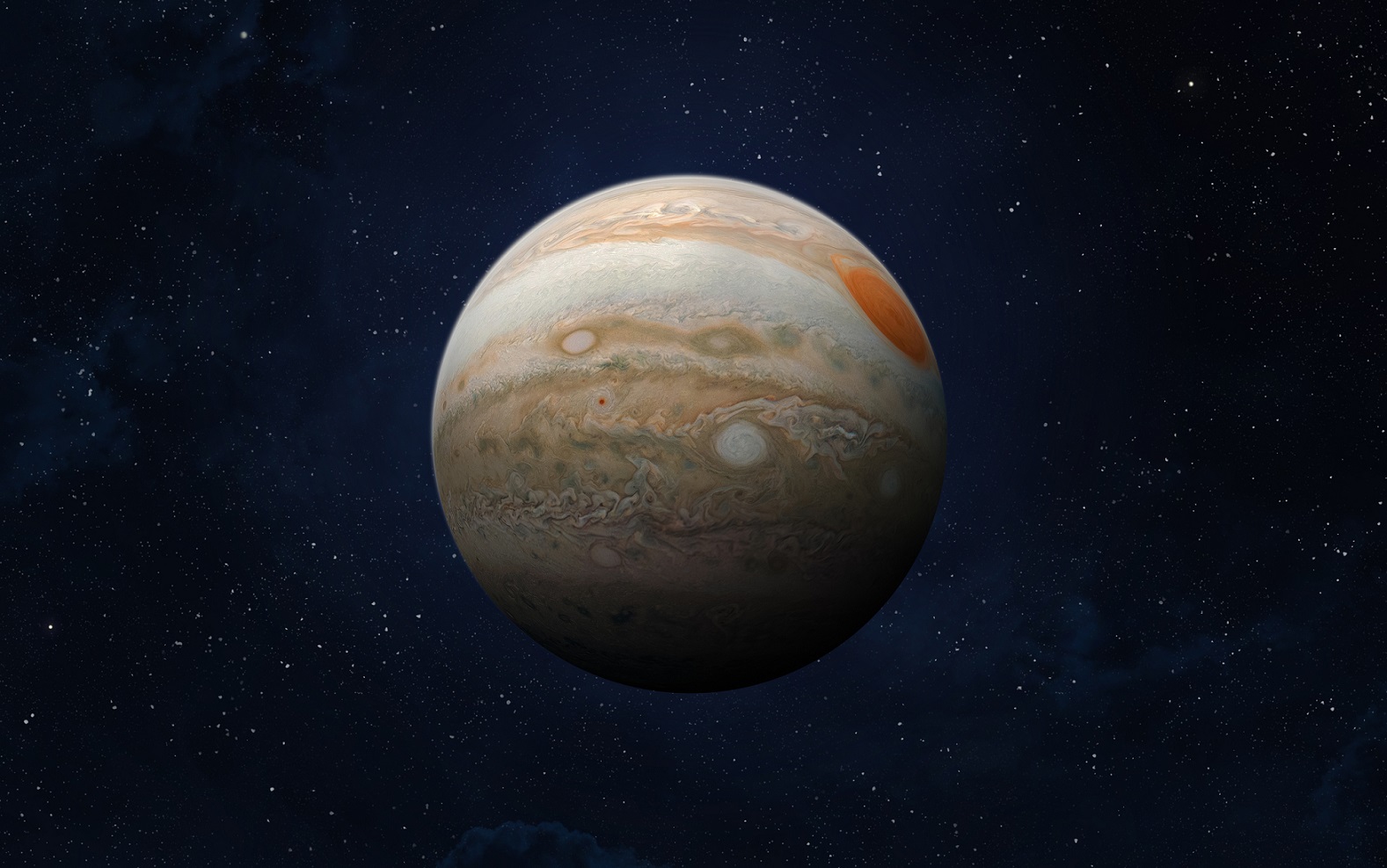 Jupiter is the biggest planet in the solar system and the fifth planet from the sun. The origin of its name is the Roman ruler of the gods, in their mythology. The atmosphere is thick and dry. Jupiter is considered a gas giant with a mass more than two and a half times the combined masses of all other planets.

Jupiter was likely the first planet to form in the solar system, according to scientists. It might have developed from gasses  left over from the sun’s creation. According to NASA, Jupiter would have developed into a  star instead of a planet, if it had been 80 times more massive during its formative years.

Jupiter is the fourth brightest celestial object after the sun, the moon, and Venus, making it a planet that , even ancient astronomers knew of  its existence.

This enormous planet takes about twelve Earth years to round the sun. It has 79 known moons, three of which are bigger than Earth’s moon and one of which is larger than Mercury itself. It is thought that this enigmatic planet may have its own internal heat source since it releases more energy than it receives  from the sun.

Jupiter is often referred to as e the Earth’s defender due to its ability to ward off any dangers to the Earth and other inner planets, due to its gravity pull. Some scientists believe that the enormous gravity of the gigantic gas of Jupiter, which is about 2.4 times that of the planet Earth, has the ability to draw some comets and asteroids hurtling from the outer solar system into its interior.

This pull of attraction may safeguard the Earth from heavy comets approaching the solar system from its furthest reaches that could have the ability to inflict incalculable harm to humanity and other life. However, thanks to Jupiter’s close proximity, these comets do  not hit Earth with enough strength to cause concern.

There are legitimate reasons why scientists refer to Jupiter as the largest planet. This planet, which is thought to have consumed pieces of other planets to become so large, is in reality enormous, gigantic, and very heavy.

So, just how massive is this planet? Jupiter is 300 times larger than Earth and twice as large as all other planets combined. In addition, its gravity is twice as strong as that of the earth’s gravity system. Its enormous volume can accommodate more than 1,300 Earths. Therefore, Jupiter is the king of the planets.

In 2016, NASA’s Juno spacecraft arrived at Jupiter and captured images of this fifth planet. After detecting changes in gravitational force throughout the planet’s surface, the team was able to speculate about what lay underneath. In place of a homogeneous and well-mixed composition, they discovered a greater concentration of ‘metal’ components heavier than helium and hydrogen.

Due to this finding, scientists believed that Jupiter may have grown by absorbing portions of other planets. All things considered, Jupiter may be the most dominating planet in the solar system. However, with it being  742 million kilometers from Earth,, there is no need for concern. At least for the time being.