Home Art Interview with Aaron Blaise: The Life of an Iconic Disney Animator 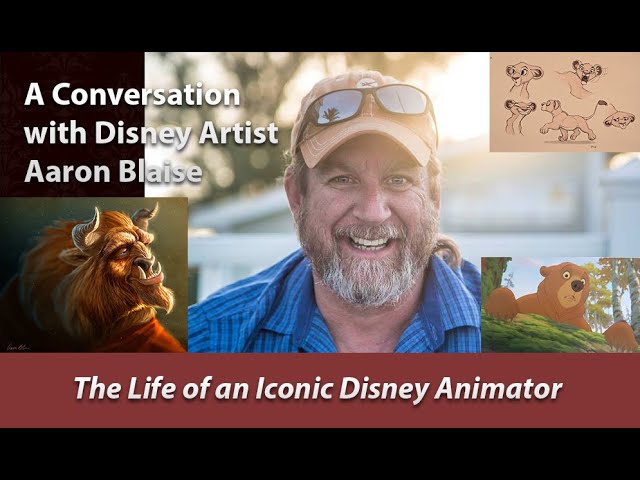 Aaron Blaise is an internationally renowned artist and animator, having spent over 30 years in the industry working for Disney on Beauty and the Beast, Aladdin, The Lion King, Mulan, and many other films that have stood as beloved treasures of our time. Aaron currently teaches animation and art in classes and workshops around the world, sharing his passion and love of nature and illustrations. He has a popular YouTube channel called “The Art of Aaron Blaise,” where he gives tutorials and insights into his techniques and inspirations in art. You can check out his website at CreatureArtTeacher.com.

A passion for natural history-type art

So as we were talking here, you said that you’ve been in the industry for about 32 years now. So when and how did you develop an interest in art and animation?

Aaron Blaise: Well, it’s funny how I ended up in animation. I just happened to fall into it. You know, a lot of the guys that I’ve worked with over the years, all they ever wanted to be was animators. They pushed their whole lives to achieve that goal. And I was a little bit different.

I grew up down in South Florida, kind of in the swamps in this little single-wide trailer. And all I ever wanted to do was draw animals. And I was always running around out in the woods, chasing, tracking, drawing. I was a creepy little kid. You know, I’d bring home roadkill to study anatomy — if it wasn’t too smooshed. And I would draw it to understand animal anatomy. I wanted to learn everything I could.

I would go back and forth between wanting to be an animal artist or vet. I went through a little stint where I wanted to go into forestry, but it always brought me back to my art. And so I really grew up wanting to do natural history-type art, whether it’s animal drawing and painting or whatever. And a big part of my life when I was living in that little trailer was National Geographic magazines, and I had piles of them. Those were my escape to the rest of the world. And I loved the illustrations in those magazines. And as I got older, I thought, man, wouldn’t it be great to be on staff at National Geographic and do these illustrations? So that kind of became my goal.

By the time I got to art school when I was 18, I decided I wanted to work for National Geographic. And so I went to the Ringling College of Art and Design. And it was toward the end of my first year that I found out that National Geographic really didn’t have staff illustrators doing the illustrations that I loved so much. Those were all freelance. And I had spent my whole college career freelancing my way through school in order to pay rent and buy my groceries and all that. And I really didn’t want to freelance anymore. I wanted to find a staff position somewhere. So I had to re-pivot and find a different vision.

Becoming an animator at Disney

Aaron Blaise: It just so happened that there were two companies coming to our school to interview at the end of that year. One was Hallmark Cards and the other one was Disney. And so I thought, I’ll put together a portfolio for both and just see what happens. And lucky for me, Disney was the first to come in. And so I put together a portfolio of human figure drawings and animal drawings. And they were doing this test, Disney was. It was the first time they’d ever gone outside of animation schools. And Ringling at the time, even though it’s known as kind of an animation school now, they didn’t have animation. I was in illustration.

And so Disney had kind of tapped out all the animation schools around the continent, and they wanted to see if they could expand their search into schools that had a good foundation in drawing and painting and bring in those students and see if they could teach them animation right at the studio. And so I was part of that pilot program. And so they came to Ringling, and I put out my portfolio, and lo and behold, myself and one other student from the school got in. It turned out that Disney picked about eight people from across the country, college students, to come out to their studio in Burbank, California, and learn animation.

I thought maybe I’d go through this internship and become a background painter or something, but I really never thought about animation. And it wasn’t until I got there and I met my mentor — all of us got matched up with a different professional and different animator. I was lucky enough that I got matched up with a guy named Glen Keane. Now, Glen is one of the top contemporary animators in the world. He created the little mermaid. He created Tarzan. He created the Beast. He’s responsible for so many wonderful characters at Disney. And it turns out he kind of had a similar background where he wanted to be a painter and went to school and found animation and became an animator.

And so when I went into his office, really still not knowing what this is all about, and he sat me down and he was showing me some of the work he was getting ready to do on “The Little Mermaid” and showing me some of the work he was just finishing up on “Oliver and Company.” And he was just talking about all the possibilities that animation can bring to an artist for expression, the passion that you can put into it. And it’s not just drawing, but it’s movement. It’s physics, it’s emotion, it’s acting, it’s music. So many different things. And I remember sitting there for maybe 10 minutes and realizing within that 10 minutes, you know, my whole life had changed and this is now what I want to do for the rest of my life. And that was that. That’s how I became an animator.

Your artwork is top quality art. What kind of training did you have to get to that point?

Aaron Blaise: Well, as a hand-drawn animator, we’re talking about this stuff like Beauty and the Beast and The Lion King, Pocahontas, Mulan, you know, all those films, that was all still done by hand. And so a lot of people don’t realize that we made those movies the same way that they made Bambi and Snow White and Pinocchio. You sit down and you draw. You draw 24 frames for every second of film that goes through that camera. And so it’s a labor-intensive endeavor. But really our language is drawing. And so in order to be the best animator you can be, you need to be the best draftsman you can be. So a lot of our training is just in the fundamentals of drawing, figure drawing, animal drawing, understanding form. The more fluent we are in our visual language, which is drawing, the more fluent we’re able to convey our ideas.

Now the industry, a lot of it has switched to digital art, animation, things like that. So do you think that’s affected the whole animation scene in terms of what you can express? How do you view this new digital platform that people are using for animation and art?

Aaron Blaise: Well, it’s funny. It’s not new. That’s the thing about it. It feels new and then it gets improved upon with every film. But it really started in 1995 with Toy Story, and that was the first fully digital film, and it’s really grown from there. And I’ve always explained that digital animation is the same as what we do, it’s just a fancier pencil. They still have to follow the same fundamentals for physics, for acting, for timing, the same stuff. It’s just done with a different tool. And so it’s interesting because animating 3D computer animation is not any faster than 2D animation. They still have to think about frame by frame. And it’s not any less expensive. That was the other thing too. A lot of people thought it would save money, but it really is the same budget. There’s a lot of misconceptions about the advantages or disadvantages. I think it’s cool. I’ve always loved cutting-edge technology. I was sad to see that it kind of pushed 2D animation, hand-drawn animation aside in the marketplace.

I think with new platforms coming out for distribution of content, things like that, the streaming platforms like Netflix and Amazon and Hulu and Disney Plus, you know, these are going to provide a huge area for us to start seeing more content. And within that content I think we’re going to see a lot more 2D animation. I think a great example that just came out on November 15th on Netflix was Klaus, which is the new hand-drawn, 2D animated Christmas story. And it’s absolutely, stunningly beautiful, and has had rave reviews. And I think that’s really going to open the door to a flood of 2D animation. And not just 2D animation the way that Disney kind of set the standard in the ’90s, but a whole new look, a whole new way of storytelling visually in that medium. And I am pretty excited about it.