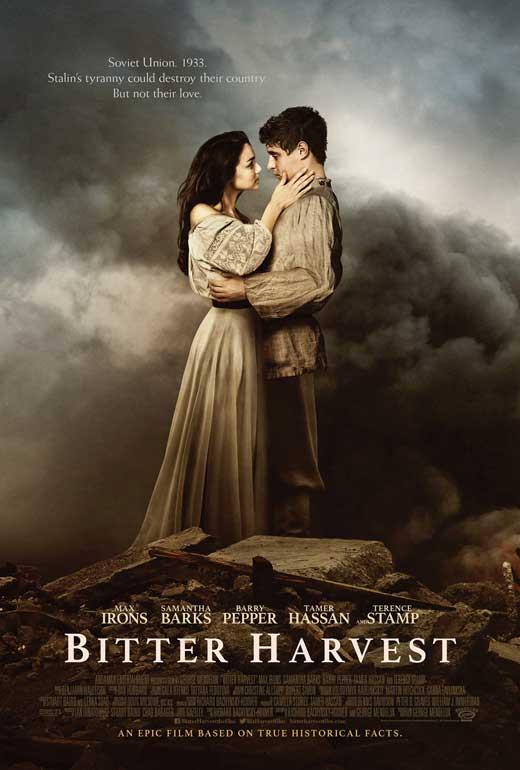 Bitter Harvest (2017) is a period piece set in motion with Soviet leader Lenin’s spread of Marxism and Stalin’s occupation of Ukraine from 1917 to 1933. The Soviet Union’s ruthless policies and confiscation of Ukrainian land and all agricultural p led to the Great Famine or Holodomor (to inflict death by hunger) that led to the extermination and starvation of nearly 10 million Ukrainians. With a budget of $20 million and a return of only $ 900,000 and with few award nominations, Bitter Harvest did not leave an impression or find financial success. The historical events the film is based on however, have not been widely known until the 1990s. The subject of the film’s setting may have been too unfamiliar for many to give this period piece a deserving chance. Bitter Harvest boldly finds its footing and purpose in relaying the tragic events of the Great Famine, one of the most horrific genocides of our time, to the world.

Bitter Harvest follows Yuri, an artist that tries to protect his family and the love of his life, Natalka, from the Soviet incursion into their humble Ukrainian village. Yuri’s Grandfather and Father follow the traditional warrior ethos of the Cossack heritage. Their fighting spirit is put to the test when the Soviet Red Army arrives. A skirmish between the villagers and Soviet soldiers leaves the village in a state of fear. Yuri sets off to Kiev to pursue his career as an artist. Soon after, under Stalin’s orders, the Soviets begin to terrorize their village and all of Ukraine. The Soviets unleashed indiscriminate murder, communist sloganeering, bizarre and brutal policies, and a hive-minded revolutionary ideology of equality and Socialism that some Ukrainians adopted at first, ignorant of Stalin’s true intentions and the means to implement them. Yuri finds his fighting spirit and makes his way back to his village to free Natalka and his family from the Red Army’s grasp. They set out to flee to Poland and then Canada in an attempt to relay the Soviet genocide of Ukraine to the outside world.

Bitter Harvest is beautifully choreographed with a special attention to detail. Very accurate period props, vehicles, and clothing from Soviet and Cossack culture gives this film the feeling it was a passion project.  one that has an unapologetically anti-Soviet sentiment. If you are into period pieces, Bitter Harvest, though treading in unfamiliar territory for most, offers a great storyline.