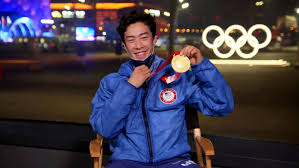 While Nathan Chen is still basking in the glory of his gold medal victory during Beijing Winter Olympic, the athlete wants to give a special shout-out to his number one supporter: his mother, Hetty Wang.

Chen won the male division of the figure skating competition at the 2022 Winter Olympics on Thursday. The 22-year-old athlete took to Instagram following his gold medal win to pay tribute to his parents, Hetty Wang and Zhidong Chen.

Chen shared an old photograph of himself in a navy-blue suit with a red bowtie and a medal around his neck (attached to a red, white, and blue ribbon). “Thanks mom [red heart emoji] couldn’t have done this without my family,” he wrote in the caption.

Growing up in Utah, Chen detailed in an exclusive interview with USA Today how his mother made numerous sacrifices to enable him to pursue his dream. He and his mother temporarily moved to California when he was 11 years old to train with Rafael Arutunian, an Armenian figure skating coach.

“We didn’t always have the funds to be able to support coaching,” Chen explained to the outlet. “So she was basically my coach throughout the whole period of time I was growing up, and along when I decided to move to California to work with my current coach, [Arutunian]. She drove me back and forth in our trusty little Prius, so a lot of miles together and a lot of time put together, but this a result for her.”

And Wang’s diligence and commitment have undoubtedly paid off. Chen captured his first Olympic gold medal with a world-record score of 218.63. He is the first American to win the game since 2010’s Evan Lysacek.