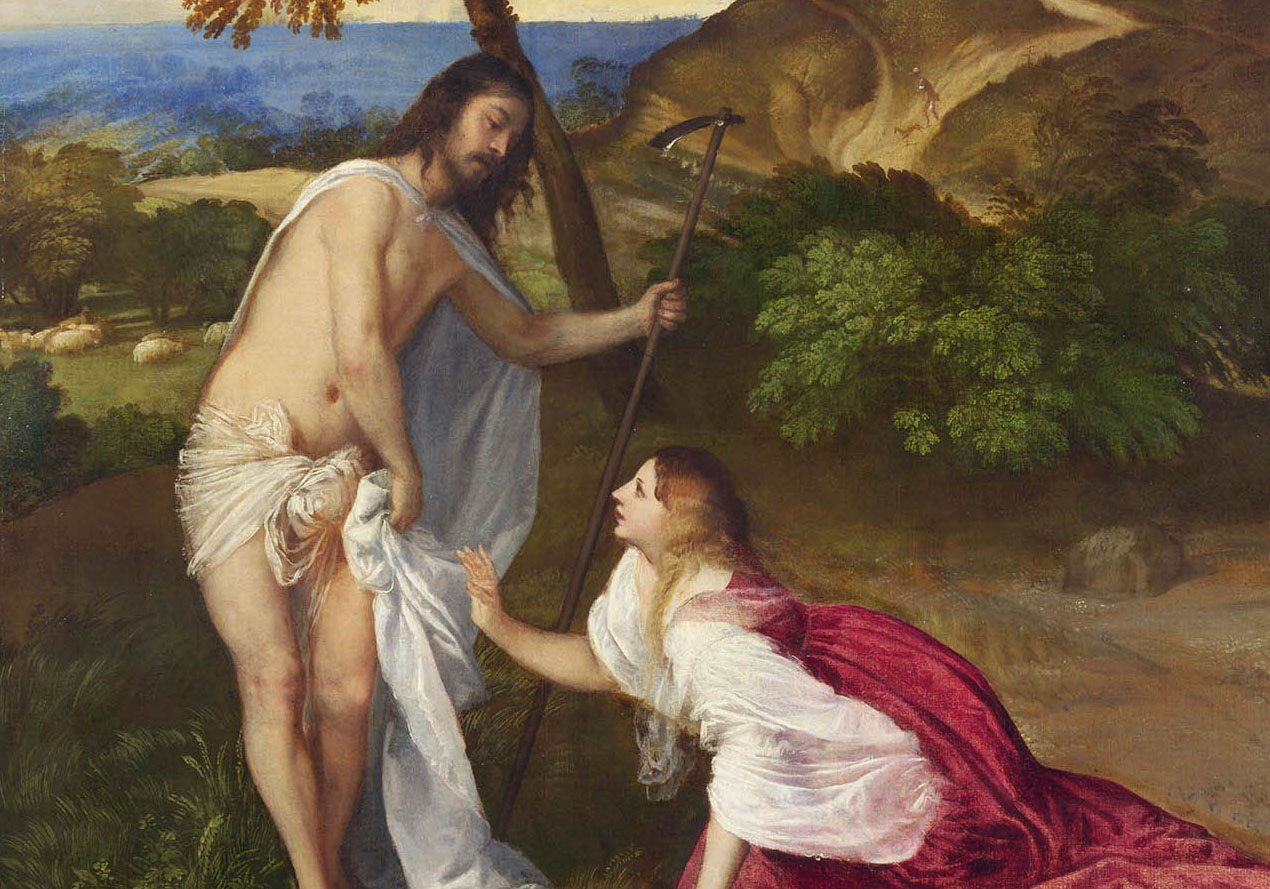 Following the Resurrection, Christ comes to Magdalene to console her. She first believes he is a gardener; when she recognizes him, he warns her not to touch him – “noli me tangere” (let no one touch me) - as the Gospels describe (John 20: 14-18). Titian, c. 1514, oil on canvas, National Gallery, London.
By Bethany Shepard April 17, 2022 3:47 am PST
Facebook
Twitter
SHARE
Facebook
Twitter

Noli Me Tangere (“do not touch me”) is the Latin translation of a line said by Jesus to Mary Magdalene after his resurrection, according to John 20:17. From Late Antiquity to the present, various pieces of Christian art have depicted the biblical scenario. Since the late 18th century, the term has also been employed in literature and, subsequently, in a variant by military troops.

The original Koine Greek words, Μή μου ἅπτου (mḗ mou háptou), are more accurately translated as “stop holding on to me” or “quit clinging to me,” implying a continual activity, not a single action.

Noli me Tangere is one of Titian’s first works. Although Titian was quite young when he created this picture, the dramatic interplay of hands, movements, and gazes has impacted viewers for ages. When the Gallery’s paintings were concealed for safekeeping during the Second World War in a Welsh slate mine, the decision was taken to exhibit one piece of artwork every month. According to a letter published in “The Times” in January 1942, “Because London’s face is scarred and bruised these days, we need more than ever to see beautiful things.”

Titian depicts Mary horizontally connected to the earth: she is a part of this planet. Christ, on the other hand, is erect, and his body, like the tree behind him, is oriented toward Heaven. He does, however, make an arch over Mary and stares at her with care and concern, demonstrating his empathetic nature and concern for mankind.

Following the Resurrection, Christ comes to Magdalene to console her. She first believes he is a gardener; when she recognizes him, he warns her not to touch him – “noli me tangere” (let no one touch me) – as the Gospels describe (John 20: 14-18). They are standing in front of a backdrop of falling hills, agricultural houses, scattered sheep, and a beautiful sunset. Titian depicts the sorrowful moment immediately after Christ’s miraculous return, when Mary realizes that, although Christ is there, she can no longer touch or interact with him.

Christ will soon go to heaven and send the Holy Spirit to his disciples so he does not want for them to cling to his bodily presence.

Mary Magdalen had just identified Jesus by the tone of his voice as he exclaims, “Mary!” Titian depicts the flood of passion that knocks Mary to the ground, an impulse that Christ instantly suppresses with the words, Noli me tangere, “Do not touch me.” The painter has omitted the majority of the typical identifiers for the scene: there is no tomb, no herald angel. There is no halo, no banner bearing the resurrected Lord’s cross. Titian is pleased with putting a hoe in Jesus’ hand, a reference to Mary’s first misperception of him (she mistook him for a gardener), and with placing the jar of ointment in the woman’s hand. Rather than that, the painter innovates by expressing the resurrection via the nakedness of Christ’s body, which is only covered by the shroud in which he was buried – a shroud whose white draping contrasts the crimson flow of Mary’s robe brilliantly. He emphasizes the tension in the woman’s movement and the proximity of the two persons whose right hands would connect except for Christ’s modest denial accented by his body leaning over Mary Magdalen.

For Christ is only passing through. His dance-like movements are oriented forward, not toward Mary, but toward us, the spectators. Thus, we find ourselves confronted by the Lord’s approach, urged also to acknowledge him and proclaim the joy of his resurrection.