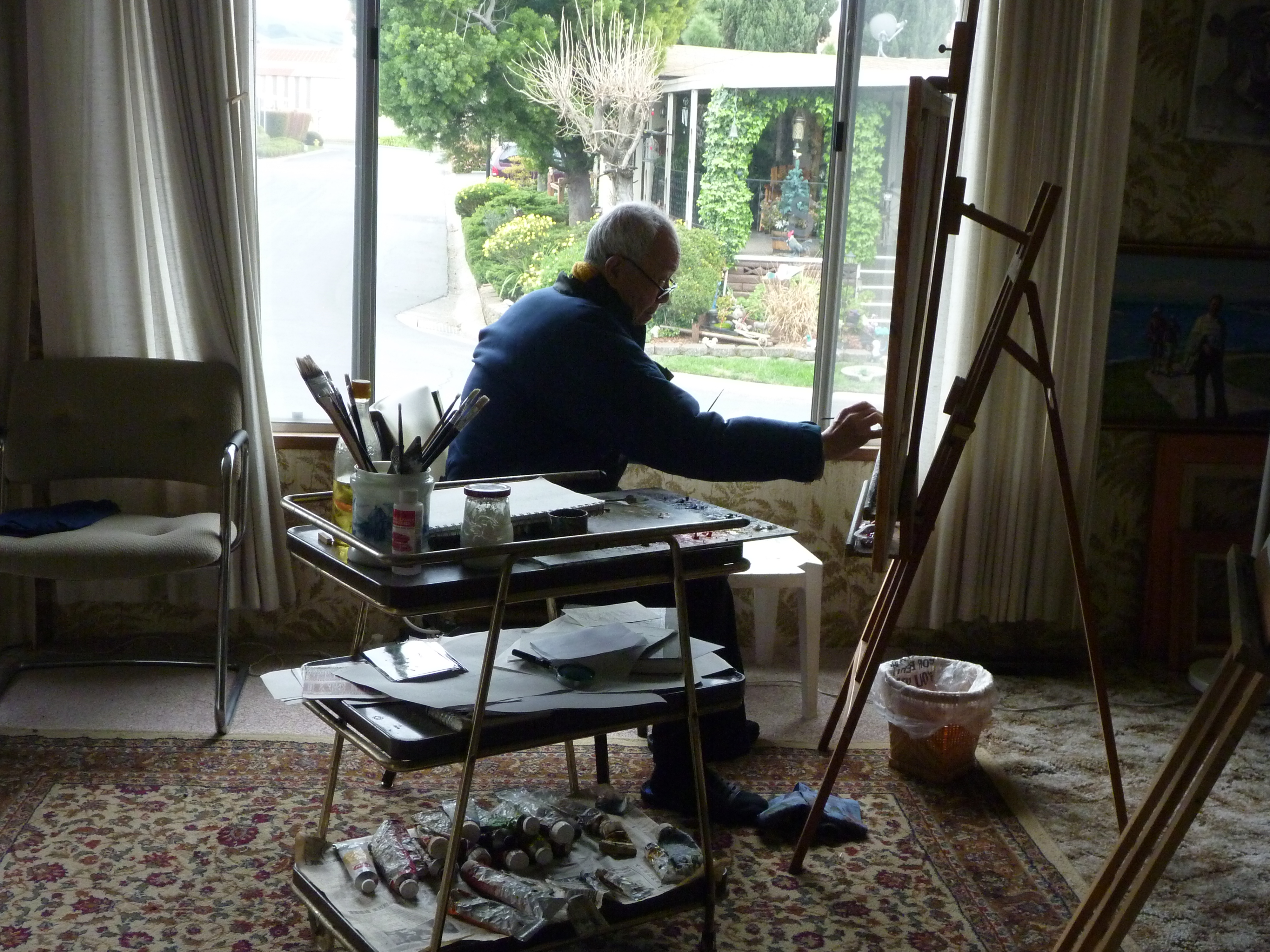 Partnering with San Francisco Senior Center, New San Cai held a lively socially distanced roundtable meeting to discuss Lunar New Year celebrations, legends, customs, and traditions through the brilliance of 85-year-old Chinese artist Nansheng Liu’s expressive works. Members of the San Francisco Senior Center were invited to participate in the virtual event, where some of Liu’s art was presented to the group and they were able to muse on this visual feast in their native tongue.

The virtual event was all about telling the stories of our diverse societies and cultures through art, enriching our world views during the pandemic. Art is considered a superb medium to tell stories about human experiences, but also an instrument to improve our mind engagements and relaxation, greatly benefiting our mental health. Through Nansheng’s paintings, participants got a glimpse of authentic Lunar New Year celebrations in traditional villages in China.

Nansheng recounted the rural festivities that took place a decade ago during his visit to an ancient town – Wugang of Hunan province. His fascination for the scenes he encountered were the inspirations for his artworks, and continue to make a deep impression on his creativity today.

Despite the fact that the Lunar New Year is one of the world’s largest festivals and celebrated by a number of Asian countries and ethnic groups, its cultural essence remains unknown in the West and among younger generations. As this festival is celebrated according to the Lunar calendar rather than the Gregorian one that dominates our notion of time, the date of the festival changes from year to year. Recently, Lunar New Year celebrations have been held around February. This year, the turn of the Lunar New Year arrived on February 1, 2022, ushering in the Year of the Tiger.

In China, festivities take place over a whopping 23 days. Traditional decorations for Lunar New Year in China include poetic couplets on each side of a doorway, colorful lanterns, auspicious words and phrases, holiday cuisine, along with dragons and lions dancing in the streets, situated around the beautiful landscapes and ancient villages by the Yangtze River, which are all depicted in his paintings.

On the first day of celebration of the Lunar New Year in China, a parade of Dragon and Lion kicks off the new year, which encourages and amasses a rich and merry atmosphere. Unlike in the West, the Dragon is depicted with deer-like horns, big eyes, a long beard, bushy eyebrows and a big flat mouth, leading a fish-scaled long body. It is a sacred symbol in traditional Chinese culture, taking on a god-like role. The water dragon rules the sea and the waters from on-high – making it indispensable for a good harvest.

The lion is a behovely figure during the celebration. For thousands of years, lions have been a symbol of royalty, strength and bravery for people across Africa, Europe and Asia. They are known to fear nothing and to act without hesitation. In Buddhism, the lion is the mount for Buddha Manjushri. Later, the Chinese incorporated the symbolism of the lion to describe the noble qualities people can develop through Buddhism. Uniting the lion with the dragon through the parade invites Buddha’s teaching into the celebrations and has brought both joy and luck to the Chinese people for thousands of years.

Buddhism plays a significant role in Chinese lives. One of Nansheng’s paintings depicts a temple built over a bridge, called Bridge Temple. It provides a convenient place for people to perform prayers and worship in the temple during their daily travels over the bridge.

However, the temple was a subject of horrific violence during the Cultural Revolution five decades ago when Chairman Mao launched the brutal cultural cleansing and incited violence across China, causing countless Buddhist temples and statues to be destroyed. After the Cultural Revolution, many temples were rebuilt, as Chinese people want to go back their roots, to practicing their religions and beliefs. In recent times, some temples and Buddha statues have been restored and improved, much to the delight of the locals.

Nansheng Liu has been painting since he was young and he has visited and lived in many different parts of the world. He was able to follow the everyday lives of the people he met during the course of his lifetime. Through his travels, he creates colorful and inspiring paintings. Many people have coveted his work – as he restores memories, tells unknown stories, and takes snapshots of a bygone era from parts of China and the world that have been lost to our modern society. Some consider his paintings to be an important gift for humanity, to preserve our past and restore history, traditions, customs, stories and memories – and that is why this artwork is so special.

Nansheng’s superb work was greeted with great praise from the participants, with one commenting “It is like snapshots of reality – very realistic and beautifully done.” Another quipped, “Nansheng’s paintings are a treasure – it can help to heal people.”
Others were eager to see the work in its full physical form as opposed to its digital rendition, with one such participant commenting, “As soon as it is safe to open the center again, I look forward to seeing Nansheng’s beautiful paintings and creations in person to enjoy the beauty, history, culture and happiness they bring to humankind.”

In a way, the Chinese Lunar New Year is a microcosm of traditional China itself. It is complex, incredibly diverse, and rich in traditions that have been shaped and refined over thousands of years.

At its heart, the Lunar New Year is about being thankful for life’s many blessings and sharing those blessings with local families and communities.