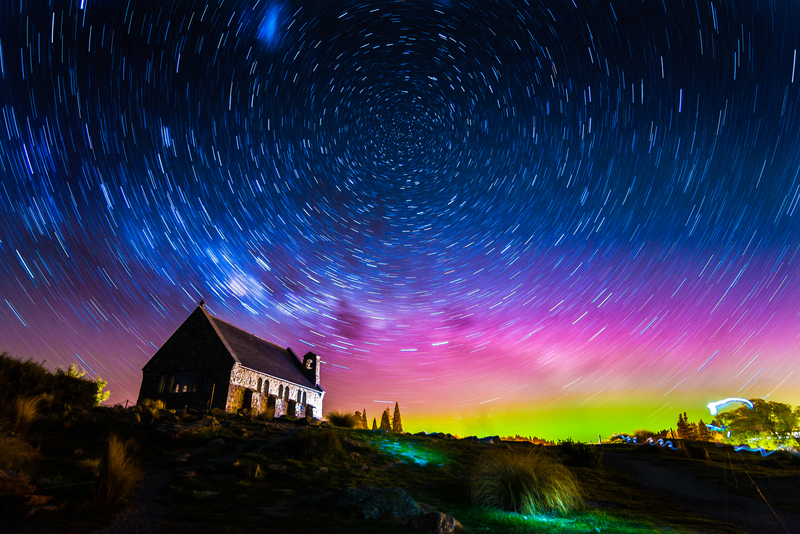 The Aurora Borealis, or Northern Lights, is a natural spectacle of iridescent light rays in the sky, usually visible at night. The scientific cause behind this phenomenon that many peoples throughout history have related to their deities is a less peaceful one: when the Sun releases energized particles toward the Earth and the particles collide with the Earth’s upper atmosphere, the result is a geomagnetic storm. Our atmosphere then channels the particles to our poles. Light waves are thus distorted into the colorful waterfalls of light green or dark blue that we see in nighttime images of the North Pole. However, when, where and how it is showcased has no secular explanations as yet.

Aurorae in the North Pole are referred to as aurora borealis while those in the South Pole as aurora australis. The Aurora takes its name from the Roman goddess of dawn, Aurora. Borealis is named after the Greek god of the north wind, Boreas, with australis being derived from auster, the Latin word for “south.”

Considering a high proportion of the world’s population live a great distance from either pole, many people may never see an aurora in person in their lifetime, and it can also scarcely be considered a daily phenemonon for those living near or in the Arctic Circle. This made the observance of the aurora in Scotland, above the region from the Scottish Highlands in the north down to Dumfries in the south, exciting news for skygazers. Many would picture a tiring trip up to Greenland, Iceland, or even the Svalbard Islands to see the Northern Lights, and the opportunity to see the ribbons of colorful lights in much more accessible Scotland makes ticking this item off the bucket list easier.

The Northern Lights are referred to as “mirrie dancers” in the Shetland Islands, north of the Scottish coast. In Scotland, the best time of year to watch the aurora is between December and January, although the time period could expand to September to March. If one were to have a cloudless night, find a location away from light pollution, and have a large slice of luck, beautiful rainbows of green, purple, and pink will light up the night sky.

Usually aurorae cannot be seen in many regions, and the lights may be unstable, making them last only a short time, but during the nights of March 13 and 14, people between the Scottish Highlands and the town of Dumfries—a distance of about 200 miles—saw the mirrie dancers at night.

This unusual large observance of the aurora is a result of Coronal Mass Ejections (CME), a powerful burst of plasma from the Sun into space. The CME caused more intense geomagnetic storms in Earth’s atmosphere, allowing the aurorae in the past nights to be brighter and more visible to a larger population.

Astronomer Steve Owens said that this time is also when the Sun is emerging from the quiet phase, a time period in the 11-year-long solar cycle when the Sun’s behaviors exchange between maximum activity followed by minimum activity—or quiet phase. Owens told the BBC that in the next few years, the Sun will remain in the active phase, and more aurorae might occur as a result.

“Last night happened to be a very good, very strong display,” Owens explained to the BBC. “It just so happens at the moment we are heading into a more active phase and last night the Sun was giving off solar flares.”

A similar mass occurrence of aurora occurred during November 2021, where cities as south as Devon, UK saw the aurora.

Although many consider aurorae as only really pertaining to the Scandinavian countries or northern Canada, there have been witnesses of aurorae in places further south, such as the United States. The documentation of aurorae dates as far back as ancient China, Greece, and Rome. People living near the North Pole would usually incorporate aurora into their myths. In the Finnish myth, aurorae are caused by the flame from the tail of a fire fox.

Because an aurora, despite being soothing to watch, is a violent geomagnetic storm in fact, it technically could cause a certain deal of harm. For example, the Carrington Event, a massive geomagnetic storm during the September of 1859, caused many telegram stations to fail and even caused electric shocks. The aurorae that occurred as a result could be seen as far south as the Caribbean.

It is difficult to forecast the appearance of an aurora, and even the most confident predictions can only give a day or two of notice, according to Owens. This is because the movement of the Sun’s plasma and particle bursts when hitting the Earth’s atmosphere is almost impossible to predict. In addition, it is difficult for current astronomy technology to accurately predict the shape or strength of a Coronal Mass Ejection, one of the major causes of an aurora. This means that patience and luck matter most in the chase for aurorae rather than relying on predictions for other more common types of weather.